Matthew 5:16 - In the same way, let your light shine before men, that they may see your good deeds and praise your Father in heaven. 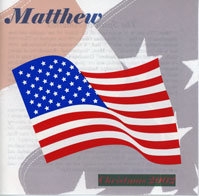 Theme: America. Cover: American flag sticker on flag paper. Inside cover included The Star Spangled Banner and personal notes about each choice: Oh, say, can you see, by the dawn's early light, What so proudly we hail'd at the twilight's last gleaming? Whose broad stripes and bright stars, thro' the perilous fight, O'er the ramparts we watch'd, were so gallantly streaming? And the rockets' red glare, the bombs bursting in air, Gave proof thro' the night that our flag was still there. O say, does that star-spangled banner yet wave O'er the land of the free and the home of the brave? O, thus be it ever when freemen shall stand, Between their lov'd homes and the war's desolation; Blest with vict'ry and peace, may the heav'n-rescued land Praise the Pow'r that hath made and preserv'd us as a nation! Then conquer we must, when our cause is just, And this be our motto: "In God is our trust" And the star-spangled banner in triumph shall wave O'er the land of the free and the home of the brave! The Spirit of America: 1. Mom, "To me, it is a reminder of the history of our country and how magnificent is our flag." 2. Grandma Gloria, "It was inspired by Pikes Peak and the Colorado Springs area." 3. Dad, "It was written on Christmas day 1896 and is the National March." 5. Mom, "Inspirational. Reminds me of having Godly hope and longing for freedom." Grandma Gloria, "It was a song at the 1st concert your father attended, and my great grandparents emigrated from Europe in the 1850's." 6. Grandpa Anderson, "I just like the sound of it and never understood any of the lyrics except for the chorus." 7. Mom, "Reminds me of how proud Americans are to be here, how we love this land, how we won't forget the sacrifices made, and how we would stand up together to defend our freedom. It appropriately says, 'God Bless the USA!'" The Land of America: 8. Grandma Shirley, "On July 4th 2002, when I first heard the album, we were driving into "beautiful" Colorado Springs, so I hope that you enjoy it as much I did the first time that I heard it!" 9. Mom, "Happy song about enjoying America's land." 9. & 10. Grandma Gloria, "Folk songs that celebrate the beauty of the U.S. and the nostalgia of traveling by train (we took 2 trips from Joliet, IL to Houston, TX on the train when Paul & Julie were very young). 11. Mom, "Reminds me of home and comfort." 12. Dad, "Some modern southern pride written in rebuttal to Neil Young's songs Southern Man and Alabama, and if you weren't listening, TURN IT UP!!! 13. & 14. Dad, "My home for the first 18 years of my life before leaving for college and my only other home state (and your only home state): Colorado, Rocky Mountain High!" The History of America: American Revolution (1775-83): 15. Mom, "Originally, it was a British tune (1750s) ridiculing the Americans" dress. The colonials took the song for their own, and when Cornwallis surrendered at Yorktown, while the British played The World Turned Upside Down, the Americans played Yankee Doodle." The War of 1812 (1812-1814): 16. Dad, "The war was remarkable for a failed invasion of Canada, the burning of the Capitol, and the Star Spangled Banner. But the last battle was fought on January 8, 1815, fifteen days after the peace treaty was signed." The Civil War (1861- 1865): 17. Dad, "It began with an attack on Fort Sumter by the Confederates. The Union responded by marching on Richmond but were met at Bull Run on July 21, 1861 and beaten by the Confederates." 18. Mom, "In December 1861, these lyrics were written to improve the marching song for the Army of the Potomac. They remind me of the faith and confidence of American people in God." 19. Dad, "May 10th 1865: After the conquest of the Confederate government, Confederate President Jefferson Davis was captured in Irwinsville, Georgia by Union forces." World War II (1941-1945): 20. Mom, "This peace song was introduced on Veterans Day 1938 as war was threatening Europe. It reminds me of the faith, dreams, hope, and freedom of others and me. Only God can protect these awesome ideas." Grandma Gloria, "It is a song that celebrates the whole country as one nation, and it was popular just after your great grandparents (Priebe, 1/14/38) were married." The Vietnam War (1964-1975): 21. Dad, "A rare pro-military song during this era, it was the #1 song of 1966." 22. Grandma Gloria, 'It is our national anthem! '

Oops, you forgot something.

The words you entered did not match the given text. Please try again.